WATCH ABOVE: An intersection in Malton remained closed on Tuesday as community members demanded answers after a 62-year-old man in distress was shot and killed by Peel Regional Police. Morganne Campbell has more about why a team tasked with responding to mental health calls wasn’t on scene.

Toronto’s Centre for Addiction and Mental Health (CAMH) says police officers should not be the first responders on scene to a mental health crisis or person in mental health distress.

“Recent events have exposed the tragic outcomes that can occur when people with mental illness experience a crisis in the community and are not able to get the care that they need,” a statement issued on behalf of the centre read on Tuesday.

“CAMH, along with our mental health system partners, has been advocating for years for measures to improve crisis care. It’s clear we need a new way forward.”

READ MORE:
Demonstration continues in Mississauga after fatal shooting of man by police

The statement comes on the heels of multiple incidents involving police and a person in mental health distress that has resulted in a fatality.

On Saturday, Peel police responded to a call for a 62-year-old man in the middle of a mental health crisis. Ejaz Choudry’s family said they called the non-emergency line for help around 5 p.m.

Three hours later, police stormed Choudry’s home, fired multiple shots and killed him. The family is now demanding the force to fire the officer who killed Choudry and are calling for a public inquiry.

READ MORE:
What it’s like to police in marginalized communities amid George Floyd protests

Demonstrators have been protesting since Sunday in Mississauga chanting “No justice, no peace, abolish the police.”

The Special Investigations Unit, the province’s police watchdog, is probing the death.

In Brampton, the family of 26-year-old D’Andre Campbell, who was fatally shot by police in April, are also calling for change.

The family said Campbell was undergoing a mental health crisis on April 6 and called 911 for help himself. The SIU, who is also investigating the incident, said officers arrived at Campbell’s home following reports of a domestic incident.

The agency said two officers used Tasers on Campbell, and an officer subsequently fired gunshots multiple times, striking him. He died at the scene. A knife was reportedly recovered by investigators.

In Toronto, Ontario’s police watchdog is also investigating an incident involving police where a woman, who was allegedly also experiencing a mental episode, fell to her death off a balcony after her mother called police for help on May 27.

Regis Korchinski-Paquet’s mother, Claudette Beals-Clayton, said she called 911 as she had done in previous instances because her daughter was said to be in distress over a family conflict and also had an epileptic seizure.

Her death was used by the Toronto Police Chief as an example as to why officers should be wearing body cameras.

In the wake of the death of George Floyd in Minneapolis, protests and demonstrations have erupted around the world calling for the same thing as those advocates – the defunding of police, better mental response and reforms.

“Police are not equipped to address mental health issues in the community effectively, and I don’t think we should continue going down the same road in terms of the ways in which they respond,” Dr. Notisha Massaquoi told Global News in an interview in early June.

The unit is meant to respond to calls for “service where mental health concerns and/or crises are identified,” according to a press release issued at the time, adding, the unit was launched in response to the “rise in mental health-related occurrences over the past several years.”

It is unclear if the unit was ever deployed in response to the Campbell or Choudry incidents.

READ MORE:
People with mental illness are more likely to be victims of violence — not perpetrators

CAMH said a “new direction in crisis care” should be implemented and that international models where those in crisis are “first met by mental health responders” can be learned from. The centre also said strategic investments in community mental health and intervening earlier to prevent an incident from escalating should also be looked at.

“For too long, the health care system has relied on police to respond to mental health crises in the the community. Transformative change is needed to support a new way forward,” the centre said.

“People with mental illness and their families deserve better.”

–With files from Nick Westoll and The Canadian Press 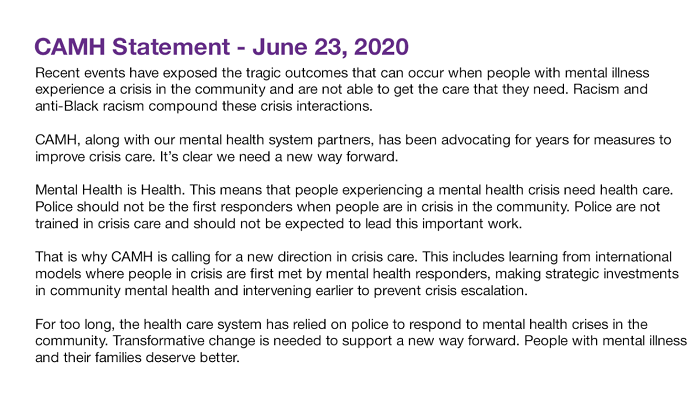